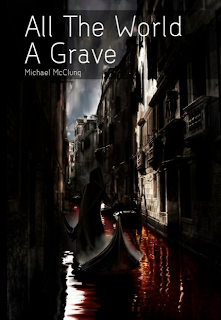 It started when Dani got me to play Dragon Age, and it got worse after Michael re-promoted his book on Facebook. Don't under estimate FB promotion when it comes to selling e-books. I'd always wanted to read Mike's book, only Phil kept on mentioning it after several bottles of wine, so I never got 'round to it. With a Kindle link on FB, immediately purcahsed it.

I thought it was very good, and when he posted about re-releasing his collecion of short stories "All the World A Grave" and asked for comments on the cover, I offered to do it for him. The result on the left.

Through Amazon's fail safe recommendation system, I discovered the Riyria revelations. I haven't read much of anything for a long time now. Apart from manuals on Wordpress, because that's what I do now. The Riyria revelations is probably the best fantasy-adventure series I've read. The story unfolds like a really good chess game. The pieces of the puzzle all fit. To top it up, that characters really stick with you. The sort I go to bed thinking about and scouring GoodReads to find another series just like it.

I suggested to Mike that we could make a graphic novel together. Although the more I think about it, the less I feel confident enough to be able to make something in any reasonable amount of time. Even if it were black and white, it will still take awhile. Plus, it would be more fun to try something a little different. Like an illuminated manuscript perhaps, or annotated scenes. I think annotated scenes could be interesting.
Posted by Isabella at 10:22 PM 30 comments:

Games, Fantasy, and everything else.

So every once in awhile I feel this great desire to blog. Like now. I've been spending quite a lot of time doing nerdy things, which is something I've always loved. Nothing like holing up with an awesome fantasy novel or playing RPGs late into the night. I used to do quite a bit of that as a kid, always loved SF. Then I turned 17, and I decided to be all grown up and only read serious books (or trashy ones written by friends) and I forgot all of it. Writing fiction became almost impossible. When I sieved through my old compositions (you know, the stuff they make you write in Secondary school) last Christmas, I remembered thinking, 'gee... I wonder where I got all those crazy ideas from'. They were good too.

Then, at some point, I 'grew up' and started wondering what the point of all this fiction was. They were set in other non-existant universes, they had no bearings on reality, they didn't aspire to be um... politically or socially critical. I stopped reading or watching anything that I felt wasn't educational in anyway. Studying animation didnt' make it better. Imagining things, and creating art became work. And so I forgot how fun these things could be.

Then somehow, Dani persuaded me to play this game called Dragon Age:Origins. I was totally against it at first. What a waste of time! But I think about SF differently again. It isn't a waste of time. It sparks something in me; almost forces me to want to imagine other worlds. And I've started writing fun things. Not like that stupid memoir I never wrote (which I supposed would have sold resonably well back during Belle DeJour days).

A friend of mine (the DM when I was playing D&D in Singers) started reviving his book, Thagoth. Phil had told me many times before that it was brilliant, and I'd always wanted to read it, but I don't have a kindle, so I never got around to it, until now. I guess part of the reason why I read it was because I wanted to stay in touch with a friend. I was really surprised at how good it was. But then again, he'd always make up really interesting narratives when we played D&D. They were always very... human.

Anyway, I'm rambling. I'll try to post more often. I keep saying that. Life is good. Dani and I do surprisingly well, admist all the failed relationships we see around us. We really take time to make the relationship work. Especially him.
Posted by Isabella at 4:49 AM 18 comments: